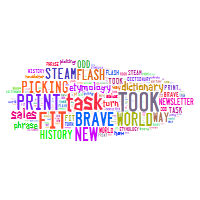 As promised, notes on my newsletter.  I am fascinated by etymology (the history of words and how they have changed).  This week, as I was typing up my newsletter, I realized that I often have an odd turn of phrase (stop laughing!).  So I decided to look up some of those phrases and give a quick history of how they came to their current meanings.

In the process of researching all this,  I found several sites that I am sure I will now be visiting regularly – English Language & Usage Stack Exchange, Today I Found Out, and The Free Dictionary.  All had fabulous articles and fun information (at least for a word junkie like me!)

©Lise Schleicher and BasketWorks, 2014. Unauthorized use and/or duplication of this material without express and written permission from this blog’s author and/or owner is strictly prohibited. Excerpts and links may be used, provided that full and clear credit is given to Lise Schleicher and BasketWorks with appropriate and specific direction to the original content.